Slaughter at the Keep of Kings

It was the day of the final day great games in Skypoint. The Lords of UDL had gathered at their keep in preparation for the soul harvest about to be unearthed over the lands of God’s Reach. A pigeon landed with a letter from the games warden, Tiggs. It was an invitation… An invitation to the mortals of this realm to test their meddle against the fiercest of beasts of the land. The final line reading “let’s end it with glorious bloodshed!”

The Lords laughed upon reading it for they knew blood would indeed be spilled, but not just from the beasts. They signaled for the gathering of the Undead Lords and their minions, and they headed towards the Keep of Kings where the games were being held. As they approached they could hear the grunts of men, howls of beasts, cheers of the crowds, and the clashing of metal… as the mortals battled for their hallow victories, and the beasts for their survival. Surrounding the keep, bloodlust in their eyes, the Lords waited for the game master to blow the horn for the next battle to begin. At the moment the horn sounded, the mortals charged their four legged foes, the Lords and the minion army launched their attack. In what seemed to be a blink of eye, every man, woman, and child was slaughtered, their souls harvested for the Dark Lord.

The wardens, watching in horror, unleashed her omnipotent powers to try and subdue the carnage, wielding fiery guns and attempting to take the lives of many of our kin. But alas, the damage was done. Pools of blood ran deep in the fertile soil of the Keep of Kings. It wasn’t long before the warden realized her attempts were in vain. The blessing of immortality proved their weapons useless, and it was only a matter of time before they too, would be slaughtered in the name of Myrkul. In fear for their lives they fled into the keep, hearkening the end of the Great Games and the existence of the world forever.

Gazing over the pools of blood and carnage, Lord Nerion let out a roaring laugh… “Glorius bloodshed indeed!” For this day shall forever be known as the Slaughter at the Keep of Kings!

Your souls for Mykul! 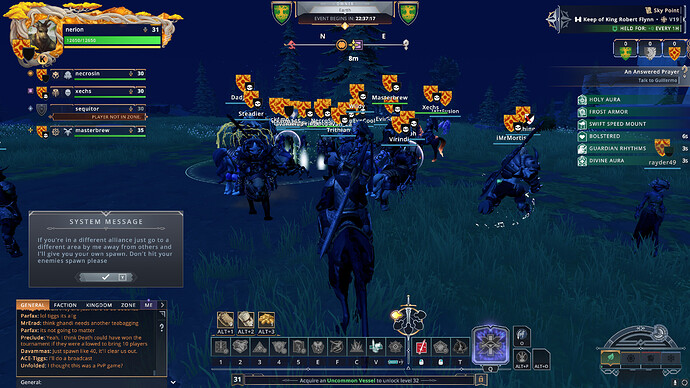 OOC: This was the grand finale’ event of the beta server lead by community manager Tiggs.