Since 1994, the Undead Lords have made it their mission to grow a community of competitive PvP gamers dedicated to establishing a dominant and respected name in online gaming. To ensure our continued success, we seek like-minded and ambitious members who embrace our vision.

The Undead Lords is a PvP guild with its roots tied to a role-playing foundation. Our expectations are that each member should hold themselves accountable to being as competitive as they can on both an individual level and as a dependable team player. A member should strive to research and master all aspects of the games they play, as well as assist their fellow guild mates to achieve the same.

Role-playing has historically been an essential part of the Undead Lords. While UDL no longer makes role-playing a requirement and focuses far more on PvP excellence, any members who do keep alive the UDL Lore should be highly respected.

Having an extensive history throughout multiple games since our origin, we have earned a well respected reputation over the years in each game we have played. UDL expects members to maintain that reputation by representing the guild on a mature level through the following rules:

We believe that each member’s involvement and contributions, whether big or small, has given UDL the ability to exist as a gaming guild for over two decades. Our hope is to continue to breed and maintain members who are constant positive contributors to the guild, in one form or another so that UDL can be a dominant force in every game we play for years to come.

UDL is driven by our active knightbase, who strive to ensure all factions are constantly pushing our presence forward in alignment with the Core Values. The following ranks are consistent across the entirety of our gaming community. 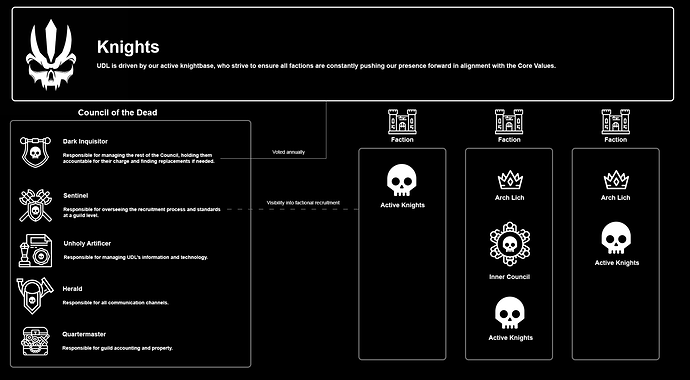 Arch Lich (GM) - The Arch Lich is the guild leader within a game realm, called the faction. They make all guild decisions within the game faction regarding guild direction, focus, and diplomacy. The Arch Lich must have obtained the Knight rank.

Inner Council (Officers) - The Inner Council serves as the leadership body within a faction, tasked with driving recruitment, managing guild assets, and overseeing organized activities. The size and exact roles of this group will be determined by the faction. Any member of UDL may serve as a member of the Inner Council.

Knight - A Knight is a full member of the guild who receives unrestricted access to all UDL’s gaming factions and forums. Active Knights help drive factional goals and structure, as well as share the responsibility of voting on Knighthood for Squires.

Squire - A Squire is a recruit who has been approved to seek full membership. Squires are paired with a Mentor and undergo a journey to learn more about the guild’s history and values.

Disciple - This rank is reserved for friends and family members of UDL Knights. The responsibility of a Disciples actions fall solely on the knight that invited them. Unlike other non-knight ranks, Disciples have no set duration or requirements and can be an indefinite position.

If the Disciple wishes to join the guild in an official manner, they may be granted a skip in the process, no higher than squire, if approved by the Gatekeeper and Sentinels.

All other ranks and requirements will be determined by the individual faction.

Council of the Dead

The following are positions in the Council of the Dead, which provides oversight into the direction of the guild across all factions. The current members of the Council can be found here.

Dark Inquisitor - Elected annually, this is the symbolic leader of the guild. While that functions only as a title, the role is responsible for managing the rest of the Council of the Dead, holding them accountable for their charge and finding replacements if needed. They may also serve as a mediator in factional disputes, but only in an advisory capacity. The Dark Inquisitor is responsible for appointing the remainder of the council.

Sentinel of Death (x2) - The Sentinels are responsible for overseeing the recruitment process and standards at a guild level. They are also responsible for benchmarking squire progress and promotions as well as documenting knight departures and removals. Sentinels are expected to keep a degree of transparency to the knight base with their thought process and structural adjustments. This role should have active insight into each faction’s recruiting, and may serve as Gatekeeper in factions that do not have that position filled.

Quartermaster - The quartermaster manages the back office of the guild including the management and ownership of guild infrastructure and accounting.

The Dark Inquisitor is charged with managing the specifics of the election process while the Sentinels are tasked with ensuring the process is fair and inclusive.

The following are positions in the faction’s Inner Council and should serve as a guideline for establishing their leadership presence. A faction may add, remove, or combine any of these roles as needed.

Arch Lich✱ - The Arch Lich is the guild leader within a game realm, called the faction. They make all guild decisions within the game faction regarding guild direction, focus, and diplomacy. The Arch Lich must have obtained the Knight rank.

Lich Lord - Second in command, this position assists the Arch Lich with the duties described above. Should the Arch Lich be unavailable for any period of time, the Lich Lord will assume the responsibilities until a replacement is found. The Lich Lord must have obtained the Knight rank.

Warlord✱ - The Warlord leads Myrkul’s armies in times of war, under the direction of the Arch Lich and Lich Lords. The Warlord is responsible for organizing and leading guild PvP activities and training.

Gatekeeper✱ - Responsible for all faction recruits. Their duties are to provide all information needed to new recruits about the guild and to keep the Knights informed of their progress toward becoming full members. The Gatekeeper works with the Sentinels to ensure guild wide standards and processes are being honored. The Gatekeeper must have obtained the Knight rank.

High Priest - Oversees the role-play sect and clerical aspects of the Undead Lords. The High Priest performs all ceremonies such as the Knighting ceremony to grant a faction member full membership. The High Priest also organizes all guild wide role-playing events.

Death Lord - Handles the organization of guild questing events for quest items, armor and weapons. The Death Lord is responsible for outfitting the guild by housing all said items and keeping an accurate inventory.

Scribe - Responsible for keeping the records of the meetings of the Undead Lords. The Scribe will also work with the Herald to keep official guild documentation up to date, including the Charter, Recruitment Process, PvP Doctrine, and Membership lists.

Arch Shadow - Oversees all intelligence surveillance on all other guilds, and appointment of ambassadors to other guilds or alliances. The Shadow coordinates his efforts with the Arch Lich and Lich Lords.

Factions, it should be noted first, are not the only way for Knights to join together to play in a game. They should never be considered a requirement to play with one another in UDL. The Faction mechanics listed herein merely define the leadership structure for games that warrant needing official leadership for them.

UDL maintains an official presence in games worthy of its attention through a system known as Factions. All Factions mandatorily fly the UDL banners and colors, and are expected to uphold our core values unless otherwise limited by game mechanics.

A Faction can be established in any realm (including beta/early access) that adhere to the criteria set below:

The Undead Lord’s official presence in a game should inspire fear in our enemies. Each faction will establish their own goals, membership requirements, recruitment methods, and structures to best further our Core Values within that gaming environment. The expectations of a new Faction are designed to ensure that it starts off with the ability to succeed at this mission. To ensure that UDL’s reputation is enhanced by the formation of a new Faction, a detailed Faction Proposal post shall be created on the official UDL forums documenting the intent to form the Faction.

Included in this Faction Proposal post should be the following: 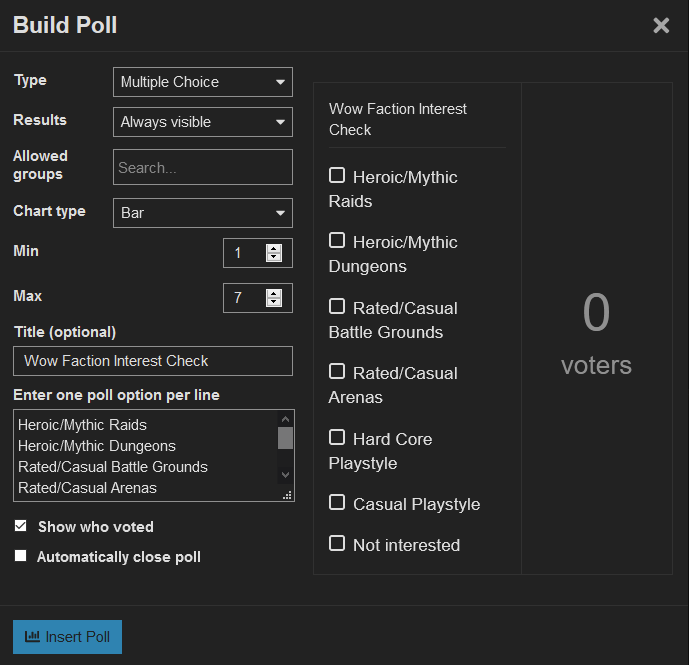 The post, and its included poll, will conclude in the formation of the new Faction and installment of the proposed Inner Council should the poll find that sufficient interest from Knights meets or exceeds the specified required minimally viable threshold for the proposed activities.

For example: If WoW requires 40 players to Raid, then 40 Knights would need to indicate interest in the poll for that activity to be governed by the Faction. If only 10 Knights were interested in Raiding, then the faction would NOT meet the requirements for its proposed faction purpose and goals. As a result, a new Faction Proposal would then need to be submitted to indicate the activities to be governed by the Faction leadership that it does have sufficient interest in.

Should the requirements for a Faction ever fail to meet the minimum required number of Knights, or the UDL banner cannot be flown for other reasons, the Faction leadership is responsible for addressing the situation and/or ultimately terminating the faction until remedies or additional interest can be made. Should termination of a faction be the decision, an official post on the forums and in #knights-only should be made announcing the end date of the faction. Termination of a Faction does not mean that UDL will never return. Sunsetting of a game is important for keeping it clear where our Knights are playing and allowing those still interested in playing an option to freely play with others.